After packing up the apartment in Cape Town we drove to the airport, dropped off the hire car & caught our flight to Jo’burg. All went swimmingly. On arrival in Jo’burg we caught a shuttle to the hotel which I’d booked as it was close to the airport given that the boys’ flight was at 9 that night and Rod’s & my flight to Kruger was at 10 the next morning. That worked well but our room wasn’t ready so we left our bags with them & checked out the casino which is “attached” to the hotel. None of us really felt like the casino so we grabbed a bite to eat at one of the many (ordinary) restaurants.

Then to fill in time we caught a movie at the cinema which was probably the worst movie I’ve ever seen (“Rampage” – 2 hours of my life I’ll never recover!).

We then played the ‘one armed bandits’ for a while until it was time to get the boys sorted & back to the airport for their flight which they caught with no problems. It was actually awful having to say good bye to them as we’ve had a wonderful 2 weeks together.. both Rod & I had to hold back the tears lol!

The next morning Rod & I were up early & back to the airport by 8 to catch our flight to Skukuza Airport which is in Kruger National Park. On arrival at the airport we were thrilled that we were there at the same time the AC Milan soccer team arrived for a match in Jo’burg.. you should have heard the South Africans roar when the team appeared – the atmosphere was so infectious I found myself running to the balcony to look!

A 50 min flight (in a small plane) & we were flying over Kruger. We organised our park fees and picked up our car (a 4 x4 from Avis) with no drama then headed off on the road to our first night’s accommodation at Skukuza Camp. We saw our first animals travelling the short 5k to the camp (only Impala but hey we were excited). We filled out the paperwork at the campsite but we couldn’t pick up the key until after 2 (definitely a “thing” here unlike at home if the room is ready you can move straight in) so we checked out the camp, picked up supplies from the shop, had a cold drink & went on our first drive. This involves driving in your own vehicle along the roads inside the park (both tar & dirt) & trying to spot as much of the wildlife as you can. 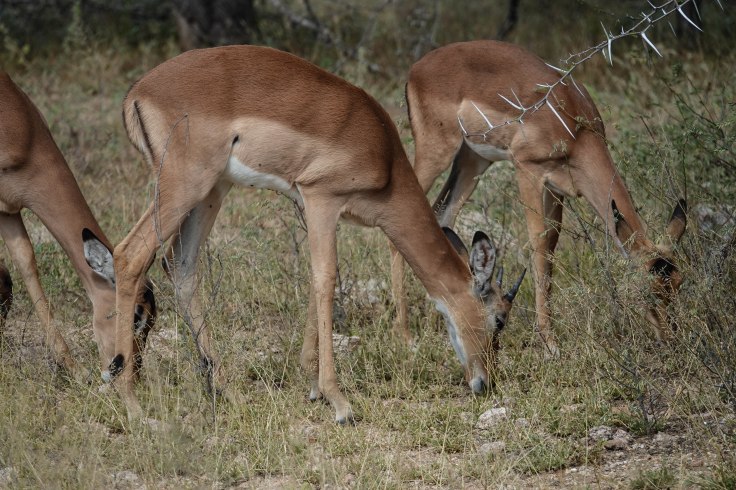 So what did we see on our first day in Kruger? A large herd of elephant crossing the road (so exciting & we were over the moon to see a baby), zebra, giraffe, impala, baboons, vervet monkeys, crocodiles and hippos! We drove back into the camp feeling euphoric. We were staying in a ‘rondavel’ at the camp which was quite comfortable. We unpacked and had a drink looking at photos & taking in the wonderful scenery as the camp overlooks the Sabie River. 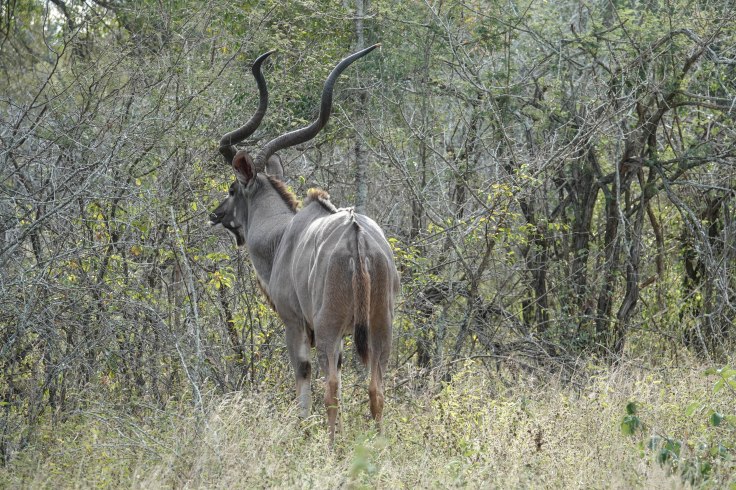 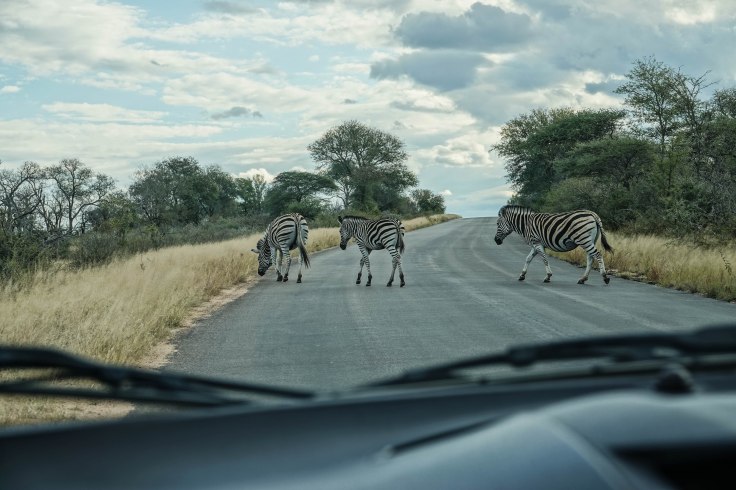 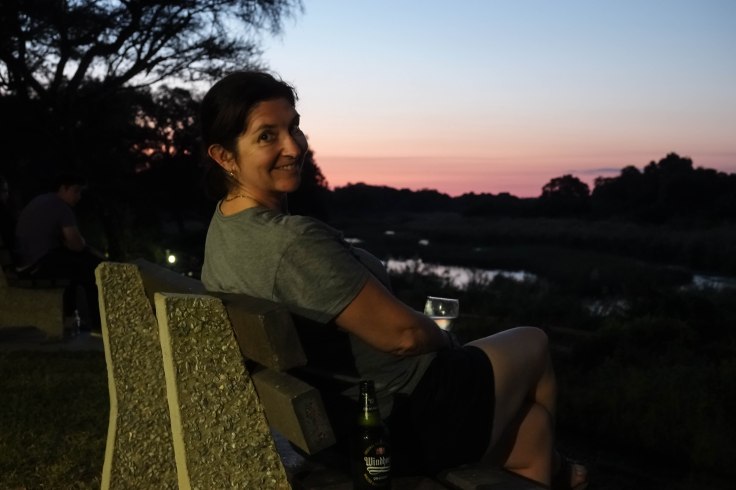 The views are lovely & way prettier than I expected. The Sabie River doesn’t run fast here but there is plenty of water still & we can see the crocs on the sand beds very clearly.

As we lost the light, we showered ourselves in “Bushmans” as we are not wanting to get malaria (& have been taking anti malaria medication) & continued to enjoy the sunset. However as night descended so did the monkeys! We heard a rustling in the trees then “thump” on our roof… we nearly s*#t ourselves so we decided that was enough of sitting outdoors!!!! The camp is surrounded by an electric fence so we feel quite safe… but what if there was a break in the fence lol!? We had dinner at the only restaurant on site which was OK. The highlight of the night was the waiters shining their torches down onto the river onto the crocodiles in the water. We then called it a night as it was going to be an early start the next morning.

We were up at 6.30 & out the door with the sun rising. As they say, “the early bird catches the worm”. Unfortunately for us though we drove for ages & saw nothing. Then low & behold, we started to find some animals. The first ones we saw were giraffe. I had some emails I needed to send so we pulled over to the side of the road & watched the giraffe while I emailed! What an office!!! We had only driven on a short way when Rod spotted something moving. I focused in with the camera & we were so excited to find that it was a hyena moving into the scrub.. if only we had been there 40 seconds earlier! 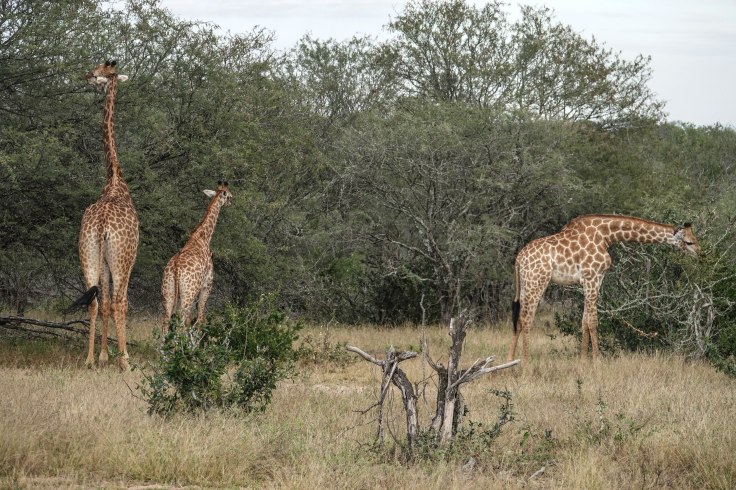 We bumped along for a while on the dirt road & found a very large elephant trying to knock down a tree so we watched him for a while. He used his beautiful trunk to accomplish the task at hand. It was fascinating. While we were parked, another vehicle came up alongside & told us there were 22 odd lions further down the road. So off we went in hot pursuit only to find 2 hiding in the bushes!!! We must have missed them. What a shame! Although it’s hard to believe that there were 22 – think she was having us on! Following a detour we drove up to a rocky outcrop where we were entertained by some very cute squirrels. 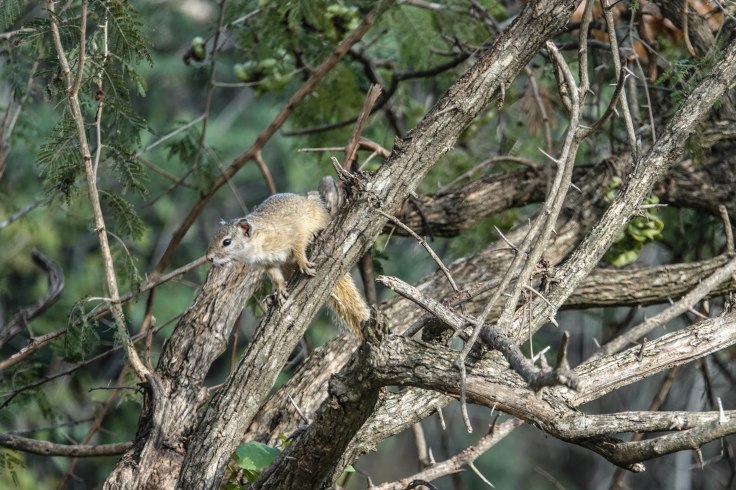 We found a waterhole where we decided to have a stop & there were two more elephants drinking. We watched them for ages as they are so divine. We drove down to Lower Sabie camp and stopped for some lunch. The drive down to this camp follows the river and we saw many crocodile lazing in the sun on the river bank. 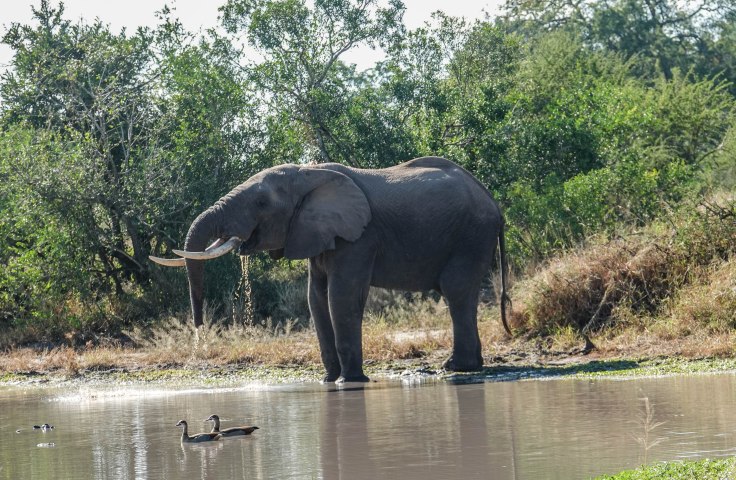 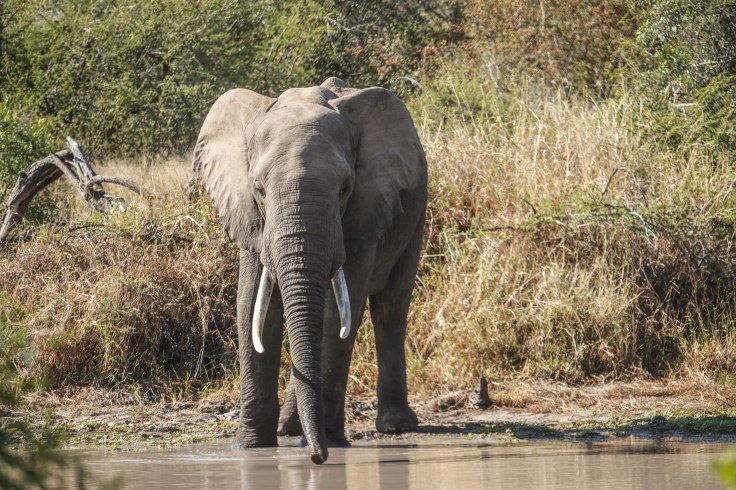 The afternoon drive back wasn’t quite as eventful but we still saw many animals and enjoyed the landscape & serenity of the park. We sat for quite a while at a waterhole watching some hippos rise in the water, blow then sink again. Just as we were near the gate to the camp Rod sad..”I’m not quite ready to go back in, lets drive around a little longer” so we headed off down the road & came across several cars stopped. There they were.. a pack of wild dogs (also known as painted dogs & very rare), playing and resting on the side of the road! Wow what an end to a sensational day! 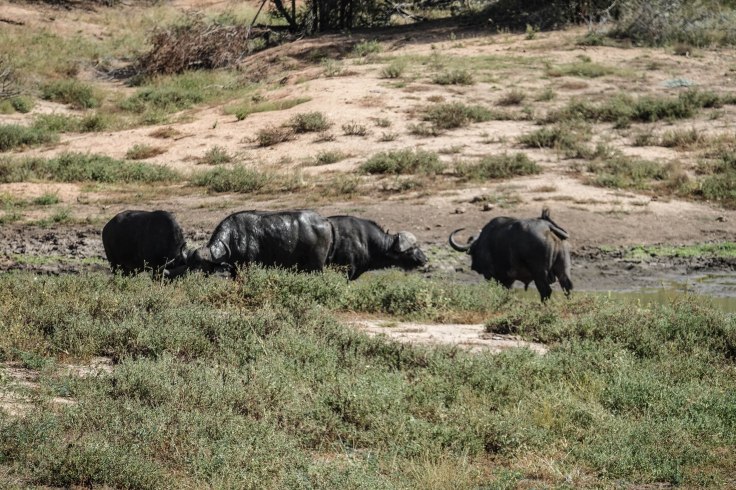 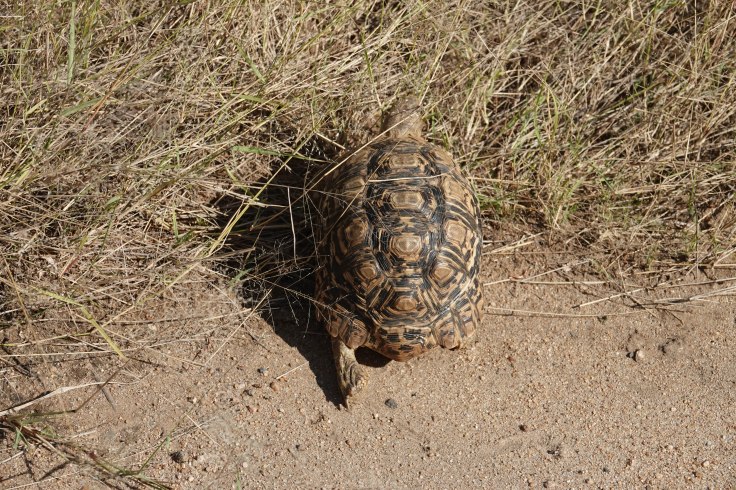 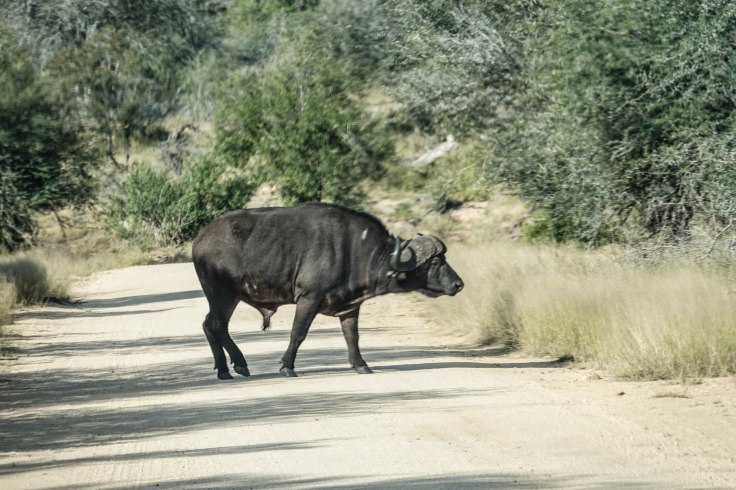 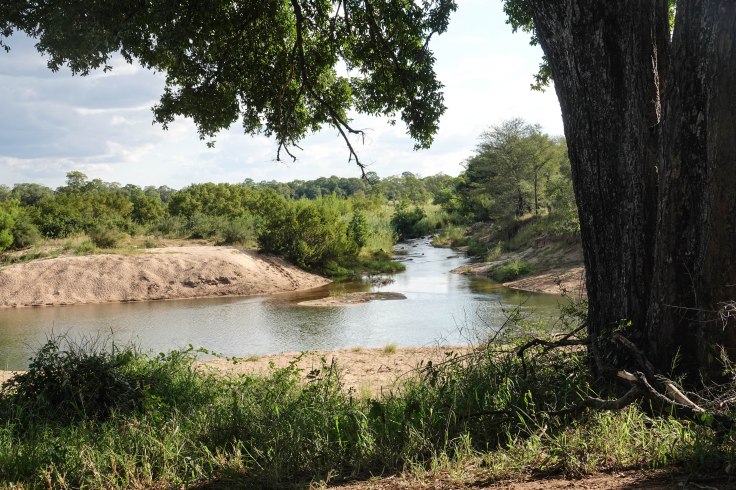 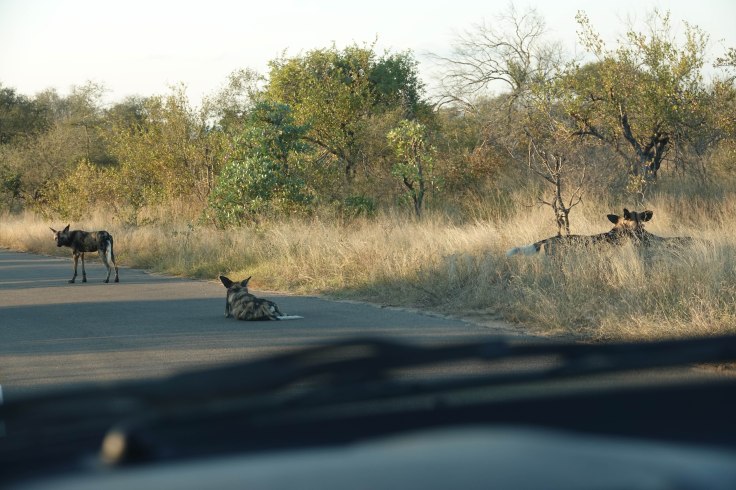 We were up at 5.30 & headed out of Skukuza north towards Satara on the H1-2. We looked & looked but still no cats. We stopped briefly for our ‘breakfast’ of bread rolls, pastrami & tomato at Tshokwane then onto the final leg to Satara. We were just approaching the camp at about 11 am when we came across the most amazing herd of elephants right beside the road. We have never seen this many together before .. there must have been more than 40. We sat in the car for ages watching them grazing, moving about, the young ones playing & the babies suckling. We then registered at reception and grabbed a sandwich then headed out again.

We headed East on the S100 which is probably one of the most famous roads in Kruger. The landscape here is more savannah so you have large herds on the flat plains. We saw massive herds of zebra, impala, giraffes & more elephants. In fact, one young elephant who was lagging behind the rest of the herd got somewhat agitated by something & started running around, trumpeting then stomped through a patch of palms & stomped & stomped & trumpeted.. it was hilarious (but we kept our distance as we weren’t sure what he was disapproving of). We drove down to N’wanetsi & walked up to the hide which had beautiful views. We could even see a crocodile way below us swimming in the river downstream. 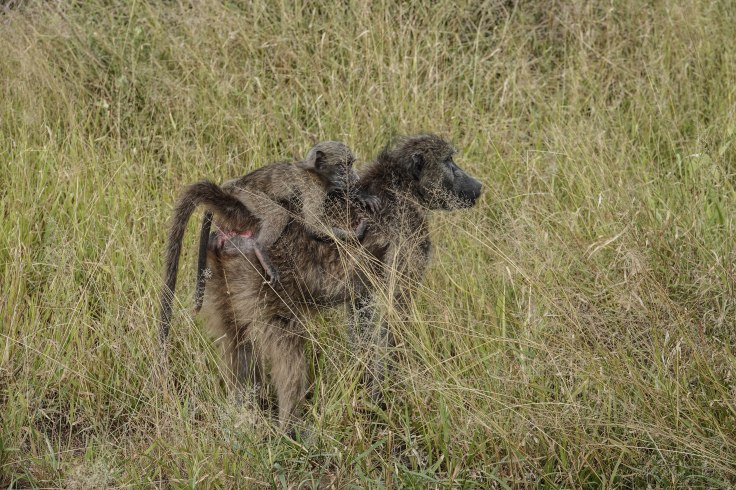 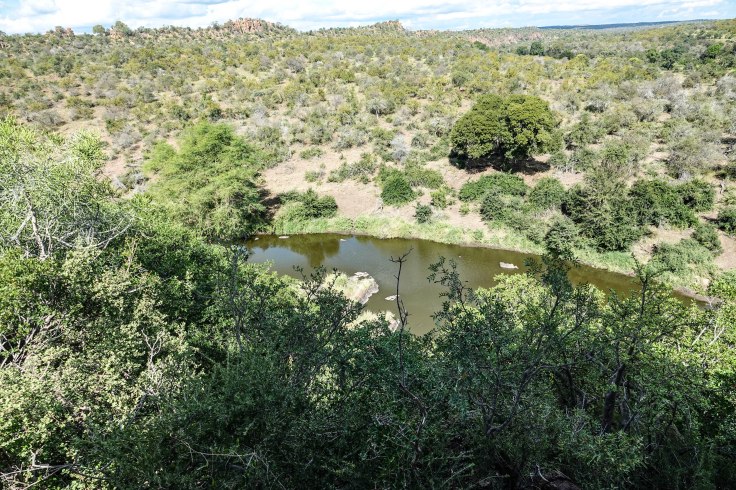 We headed back to the camp & picked up our room key at 2 then headed back out for our afternoon drive. Rod is sensational at driving. He is happy to do it & has the hang of driving and searching for game at the same time. He’ll often spot something before I will – it’s become quite a competition.

This time we headed west on the H7. We passed a large waterhole and sat for a while watching a few hippos. I got a great shot of one with his jaws open but none out of the water again. After taking the turnoff for Timbavati we came across another herd of elephants. One was a very large bull and a smaller male & there were two drinking out of a large water tank. They were there for ages so I wouldn’t be surprised if they drank it dry! We then drove up to the picnic site, had a stretch of the legs & admired the dry river bed then headed back towards the main road. We had to stop a few times as there were animals on the road. The best were 5 giraffes who were happy just to walk down the road. We followed them for a while but were conscious of the time as the gates to the camp close at 5.30 so we pushed on. We nearly hit an elephant as we were driving down the bend, he came running out of the bushes on the left in front of the car.. funniest thing! 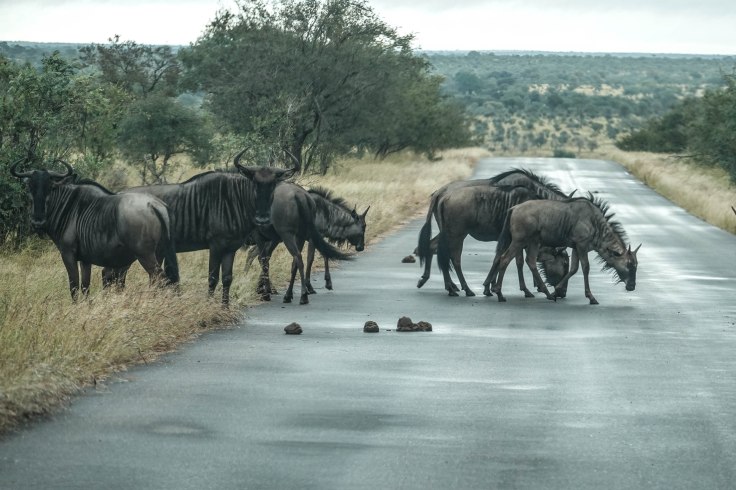 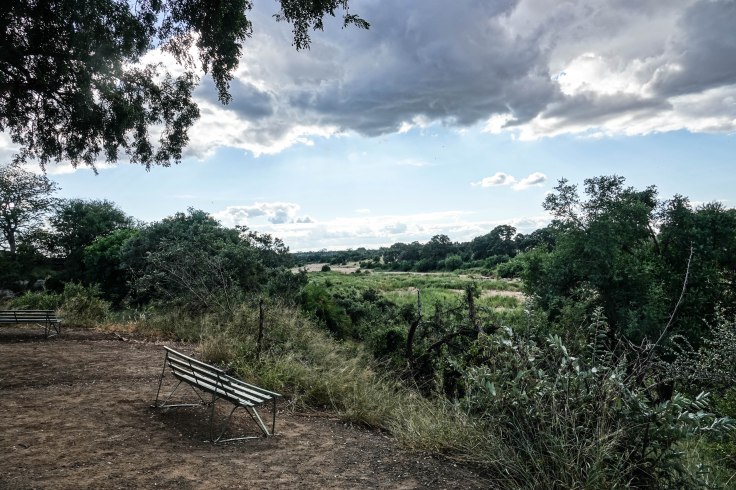 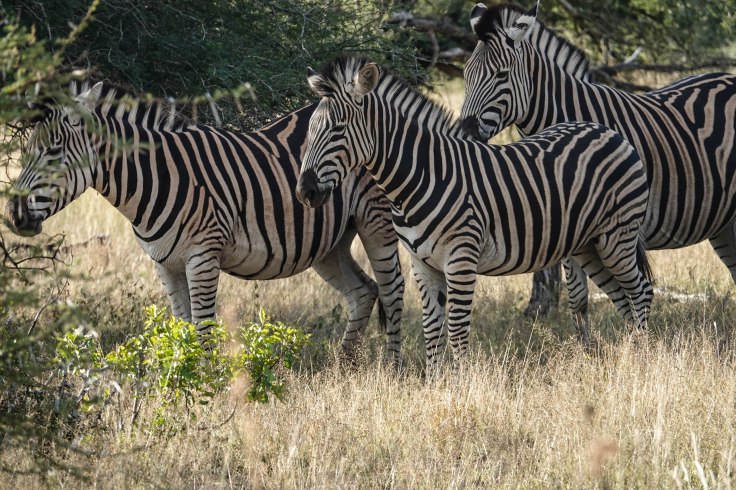 Even on the main road back we had to stop as there were elephants on the road. We stopped again at the waterhole & the hippos appeared to have not moved!

Back to camp & an early night.